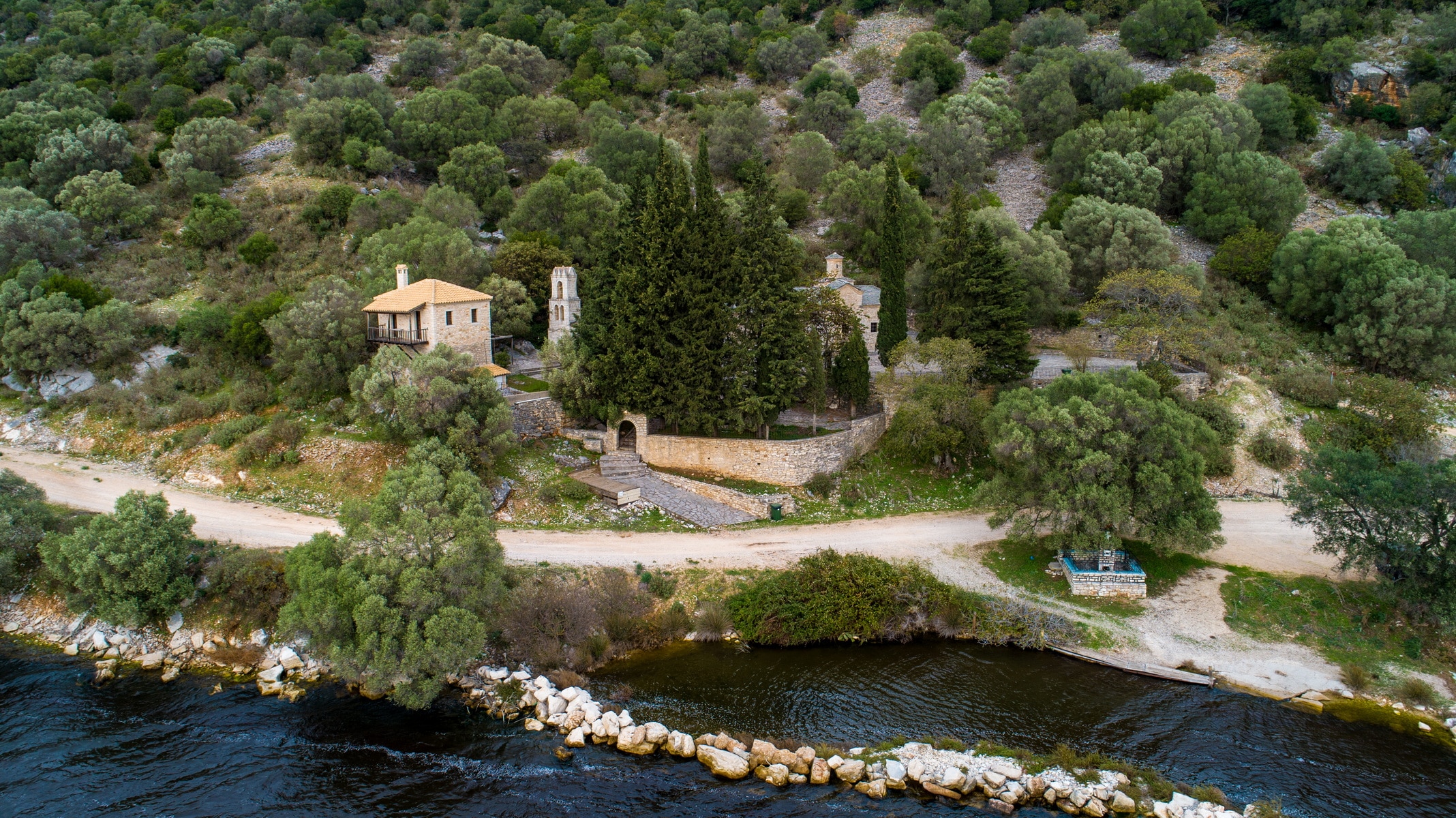 Church of Panaghia of “Rodia”

The Monastery of Rodia or Roidia or Rodon to Amaranto (everlasting rose in Greek), dedicated to the Dormition of the Mother of God, is located at the foot of the SW slope of Mount Mavrovounio (altitude 299m.), above the NE shore of the Rodia lagoon, west of Arta and between the villages Vigla- Stroggyli. It was built in 1860, on the place of an older Byzantine katholikon, known in written sources by the nickname “”Rodon Amaranto””, like the Virgin Mary’s icon homonymous iconographic type. Both the newer church and the lagoon received the name “”Rodia”” from the same image.
The foundation time of the Byzantine katholikon is not confirmed. According to Seraphim Xenopoulos, Metropolitan of Arta of the 19th century, it dates back to 970. According to his information, a Stavropegian monastery was erected in this place when Ioannis Tsimiskis was the emperor in Constantinople and Vasilios was the Patriarch. The information is quite accurate, as it is based on specific data provided by the metropolitan and reports that, according to him, were revealed by ancient manuscripts that existed in the monastery and which, unfortunately, are not preserved today. We learn from the same source that the monastery reached great prosperity and owned numerous estates, a fish farm, and four metochia (dependencies), including the Byzantine church of Agios Nikolaos of Rodia in Kirkizates. Panagiotis Aravantinos, a 19th-century chronographer, believed that the monastery was older and dated its foundation in 925. He also mentioned that the monastery had an income of 8,000 grosis a year in the 18th century.
The monastery often took the lead in the struggle against the Turks and became the target of brutal raids many times. In the years of the revolution, it was completely ruined. The Turks seized the estates, and the temple was destroyed. It remained so until 1860, when the exquisite present-day church was built in its place.
It is a large single-aisled, cross-roofed, vaulted basilica with a vaulted narthex and a high dome with a very small diameter, making the temple elegant and graceful. This peculiar dome is also its characteristic trait, and since it is unique in the ecclesiastical architecture of Epirus, it makes the monument even more extraordinary. The tiled roofs reveal the craftsman’s obvious effort to highlight the shape of the cross. The two domes on the vertical antennas of the “”cross”” are externally formed like a pediment, thus contributing to architecture’s variety in the exterior.
The masonry is very elaborate in the corners, with unique exterior decoration, a simple jagged band on the cornices of the main building, and a double one on the cornices of the dome and the niche of the sanctuary. As evident from the masonry, the square narthex was added later, before 1884 without a doubt, which was the year it was illustrated.
The interior of the temple is fully decorated and in excellent condition. According to an inscription on the inner lintel of the south entrance, Samarinian painters illustrated the temple in 1884. The iconographic program, well-known in the years of Ottoman rule, is arranged in zones, with full-length saints underneath, busts of saints in the middle, and evangelical scenes or scenes from the liturgical calendar in the upper zones. Key elements of the style of the representations are the bright colors and the radiant faces with the suave expressions that do not resemble the well-known strictness of the Byzantines but rather approach the hagiographic tradition of Chionades village. The church of Panagia Rodia is a remarkable architectural and hagiographic monument of the post-Byzantine painting tradition.
At the same rocky slope’s foothills, a cave near the temple had been used as a hermitage for many years, as the frescoes’ traces on its walls reveal. According to Aravantinos, the chronographer of Epirus, Saint Vlasios of Sevastia was an anchorite there. Unfortunately, brutal interventions eradicated these murals’ glow, desecrating the area, since the cave had been used as a stable for many years.

Church of Aghios Nikolaos of “Rodia”